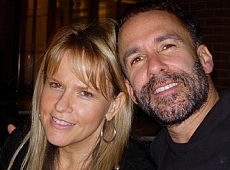 Feb 2012 interview with Richard Gannaway and Miriam Stockley of AOMUSIC

THE TRUE CIRCUMFERENCE OF LOVE – an excerpt from “…and Love Rages On!” by Richard Gannaway

We can start to fathom our roll in nature by embracing the greater scope of its most enigmatic principle, Love. We’ll explore this essence outside the illusion of duality consciousness, which is the hallmark of human adventure through the immensely beautiful, but illusionary projection of time and space. Love doesn’t begin inside this illusion where we feel the sensations of what we think Love is. It is the immeasurable force behind every expression within the whole of Life at any conceivable frequency. Using our best imagination to zoom back on creation, we still don’t see the circumference of Love, which has no definition, only motion. It is forever blooming outward and inward, constructing, creating, evolving and breathing through every medium. It is the deepest and most pervasive abstraction behind all that is taking place in this moment. Love is simply the only true nature of anything. This inclusive scope of Love may not be what some believe is possible or initially feel very comfortable with, given the context in which Love is usually perceived. It might require one to become outrageous in their thinking, and that would be a good start; because Love is not at all logical, any more than Life, beauty or eternity. Each of these principles implies the other in an honest engagement with nature. Let’s continue exploring nature through its most unpredictable and primary cause, which as Rumi reminds us, needs no cause.

Both light and shadow  are the dance of Love.
Love has no cause;
Rumi

Love as a force in nature, is reflected in a design—a template for harmonic resonance that oscillates on endless octaves of frequency. As a great overriding force inside the circumference of Life itself, it remains directly unexplainable—yet by noticing a harmonic pattern behind the components of beauty, and how it connects every realm of nature, what is implied becomes obvious. Nature’s template for design, which is deeply fascinating and easier to comprehend, bears all the evidence of its presence. Every tenant of beauty suggests something we cannot begin to define. Sound, color, shape, movement, orientation, fragrance, freshness, etc lure us in to a realm more rich and vital; romancing us in captive wonder and ecstasy. Imagine this window of sensory transcendence, widened to include almost everything we perceive around us; revealing a synchronicity and weave behind all time-space phenomena. This is where illumination blooms in humanity—through a realization that nothing in its own motion isn’t beautiful within the symphony.
Zooming into a single expression of Life, on any event horizon, in any timeline of existence, and you witness Love—always in motion, becoming and expanding. The movement of Love is what is important to understand; because it can never be defined in a snapshot, anymore than a single day in one’s life could tell their whole story, or a single measure of a song could render the complete message. Attempting to corral the whole principle of Love into a fragrant aesthetic that fits neatly into our comfort zones, completely reduces the unfathomable dynamic of its true scope. Imagine that Love requires a complete range of expression as its landscape for movement in this adventure through time and space. Imagine that, in this framework, it cannot be identified or captured, only enabled, which allows every circumstance and experience to be embraced exactly as it is—a continuum of change. Joy, sorrow, pleasure and pain are only the emotional register of its force, but Love itself is an actual design, permeating every spec of existence. It is the eternal promise of growth and new Life.
The true nature of Love is not a warranty for bliss and comfort. It is designed for evolution and its motion doesn’t rest. It is easily the most insistent, intoxicating and inconvenient force in creation. When owned or boxed in, Love reaches out like a scorpion to sting our most hidden vulnerabilities until all pain and fear is spent. Resist love or hold it away and the whole organism begins to fade like a fallen leaf, disconnected from its source. As will become apparent on these pages in the literal sense, Love, like the Golden Mean, is a naturally occurring constant in all that exists; because it is the life in the motion of everything imaginable. The golden ratios, which are universal constructs for how beauty displays before us, apprehends our senses, and bridges one dimension to the another, are direct physical reflections of Love; which needs only to be surrendered to.
Increasing numbers of children actually seem to arrive here with direct memory of our true context, eager to remind us that Love has always been here in abundance and we needn’t keep fearing it has, or could ever, escape us—which is quite impossible. Life in any presentation is a motion of Love, raging forward. Like every other force in the natural world, human nature is a dynamic process, where every spike of rebellion is absorbed into a rich harmonic chord of evolution, steadily, patiently and consciously—a true pageant of light. As fear recedes we naturally express unconditional Love, because it is the most naked display of our existence. Unlike fear, Love is not a reaction to something, but the original ground state of our being. It is something we don’t need to manufacture or reach for, just unveil.

“Love does not have to be generated, for it is all that remains when there is no fear..”
Gregg Braden ‘Awakening to Zero Point’

The time-space universe is defined by our own depth of perception, and is a mere reflection of something vast, beyond human comprehension. In this dimension, what we think we perceive around us is actually an illusion of opacity—a projection. How does one defy those limits and actually step into a reality, based on principles of light? We must enter the rabbit hole, the still point, the present—which has no dimensional boundary. We do this by surrendering all resistance to an ever-present force that naturally occurs. As stated, the scope of Love is immeasurable and all-inclusive. It moves, displays and manifests as a non-dualistic principle. Nothing we can perceive or feel is outside of its motion, unimaginable as that seems. Love’s design is in the shape of growth and evolution—an eternal principle of Life in bloom, with an infinite range of expression. Love is not something that fits easily under our security blankets, where growth and evolution rarely occur. Love is the motion and the mean of constructive force behind the only miracle that has ever or will ever occur—Life. It is creation itself.
“Easy for you to say”, says the ragged figure, staring quietly from a filthy doorway, trying not to move until the sun rises high enough to thaw his bones. He wouldn’t be as gloriously authentic if he was polite. It can often seem inappropriate, unrealistic or inconsiderate to mention Love as a primary force in creation with so much homelessness, corruption and atrocity in our populations. The point here is to expand perspective on Love to include every dynamic in the wholeness of Life, which is energy (light) at its core, and consciousness, which is simply Life, aware of itself.

This is an excerpt taken from the book “…and Love Rages on!”, by Richard Layton Gannaway, published by Arcturian Gate.