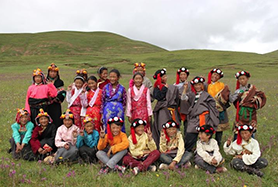 These children live at sixteen thousand feet in the Himalayas, and several of them were orphaned by an earthquake in 2008. Their voices can be heard on the chorus of “Jabulani” from our 2017 album release “Asha”.

Our colleague Bill Whelan invited us to record this choir at his studio in Galway, Ireland. They are featured in the track “Itu Lagu” from AO MUSIC’s 2013 CD release Hokulea, and several of them are uniquely gifted as soloists.

This choral ensemble has over 100 children. In 2004, they rehearsed and performed in the first ever AO MUSIC concert at the Bangalore Habba Festival. They are featured in the song Obayo from the 2009 CD release ‘Twirl’.

This choir is featured in our production of theme music for the 2008 Summer Olympics. Their tracks are heard in ‘On Jai Ya’ and ‘Zhaia’ from our 2009 album release, ‘Twirl’, and ‘One Kaleo’ form the 2011 album ‘…and Love Rages On!’.

These boys begin training at a very young age in the Georgian tradition, without vibrato. Richard went to Tbilisi to work with Martve in late 2008, and features them in the track “In Lake’ch” from our 2011 album “…and Love Rages On!”.

This choir has beautiful dynamics and spirit. We recorded them over a two-day period in 2010 and attended one of their amazing concerts. They are featured in the track “Ena Na Lena” from our 2011 CD release “…and Love Rages On!”.

These children performed with AO MUSIC at the 2007 Sound Healing Concert in San Francisco. They only had two days rehearsal, and executed a stellar one-night performance. They are well trained and tour internationally.

Richard has worked with children in various grades at this amazing school since, and their voices grace AO refrains “Ena Na Lena”, “Kuimba” and most recently “Where in the New World”.